SPECIES OF THE MONTH: OCTOBER 2015 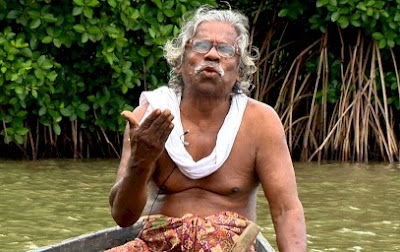 Kallen Pokkudan was the guardian angel of Kerala’s Mangroves. He had been a motivation force in the conservation of mangroves in Kerala. But, nobody knows that among Mangrove plants, he had a favourite.  He began the conservation of Mangroves by collecting, preserving and planting the seeds of a particular Mangrove known hither to known as ‘Red Mangrove’ (Rhizophora mucronata). Over the years, Pokkudan has planted over 1,00,000 mangrove saplings with his own hands. As he passed way last month, this mangrove can be worth renamed as ‘Pokkudan’s Mangrove’.


Rhizophora mucronata is a small to medium size evergreen tree growing on the banks of rivers. The tallest trees are closest to the water and shorter trees are further inland. The tree has a large number of aerial stilt roots buttressing the trunk. There are corky warts on the pale undersides of the leaves. The seeds are viviparous and start to develop whilst still attached to the tree. When the root reaches the length of a metre, the propagule then becomes detached from the branch and drops to the mud below to get anchored there. This is one among the main characteristics of many Mangroves.


Rhizophora mucronata has multiple uses. It is used to help prevent coastal erosion. The timber is used for firewood and in the construction of buildings, as poles and pilings, and in making fish traps. The fruits can be cooked and eaten or the juice extracted to make wine, and the young shoots can be consumed as a vegetable. Powder from the bark of Rhizophora mucronata is known to act as an astringent and used for the treatment of diabetes, haemorrhage and other ailments. There are many more un-recorded uses, still being practiced in folk-medicine.